Reviewing what we need to know pre- and post- C# 7 features about the type system and references in particular, while correcting common misconceptions along the way.

What would the following code output? Hint: An array is a reference type.

Put simply, a type is something that describes what a variable can hold.

Misconception: The new keyword means we are creating a reference type. Wrong! Perhaps this comes from the syntax provided by the primitive type aliases (and also many developers aren’t using structs regularly, so won’t be exposed to using new with them).

Primitive types are those, which the compiler supports directly, along with a range of operators and casting between them. They map to framework types e.g.

The C# compiler will emit identical IL for the following lines.

The latter is the alias, which primitives provide, that masks the use of the new keyword for those value types.

Below is a quick sketch of the types in C#. The Framework Class Library (FCL) obviously has a lot more that I won’t try to squeeze in. 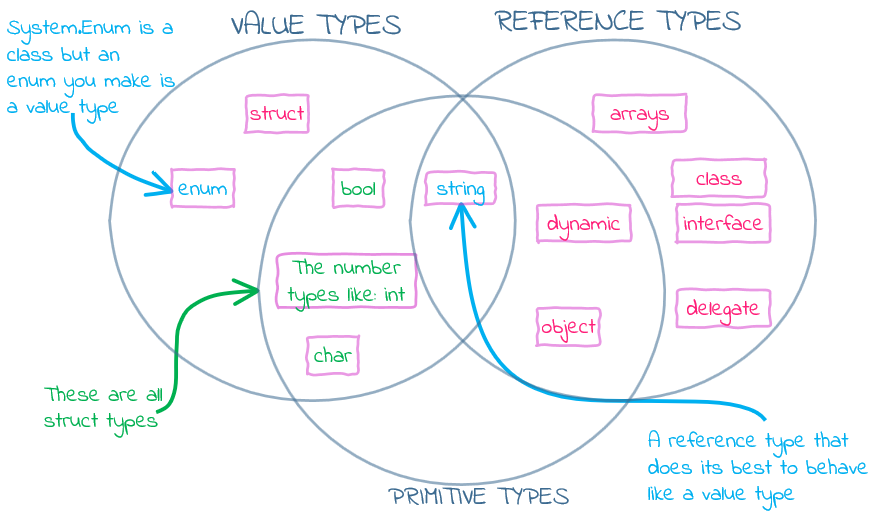 If you edit the copy made of a file, the changes do not affect the original file.

This is how value types are passed around in C# – as copies of the data. Given:

A note on inheritance

Just to confuse, all types, including System.ValueType, inherit from System.Object . Don’t get ideas – this is so we can have them behave like reference types through boxing. Us developers cannot actually inherit from value types in our code.

We’ll start this one with the analogy of a link to a file:

The ‘link’ from this analogy is a reference in C#.

A reference type still has a value – it’s just that the ‘value’ is a memory location where the actual data is.

By default, we are not directly working with that value. Whenever we access the variable, we are fetching the data stored in the memory location referenced by that value (Mads Torgersen uses the example for those from the pointer world - think of it as automatically dereferencing)

So, when you pass one of these around in code, it is making copies of this reference, not the data. Consider the following code:

We have created a new SimpleObject in memory and stored its memory address / location in the value of original.

When we make a copy of it, we are still copying the value as we do with value types:

But the value being copied is this memory location.

So now copied and original both reference the same memory location. When we modify the data referenced by copied (the property inside it, Number), we are also changing original.

Now it gets interesting, and gets us a step closer to understanding the behaviour of the code in the warm-up exercise.

Remember – the ‘value’ stored in a reference type, is the reference to the object’s memory address. Now we create a another SimpleObject,_ after making a copy, and the new operator returns its memory address, which we store in `original</span> .

copied still points to the object that original used to point to. Confusing? Let’s return to our analogy: 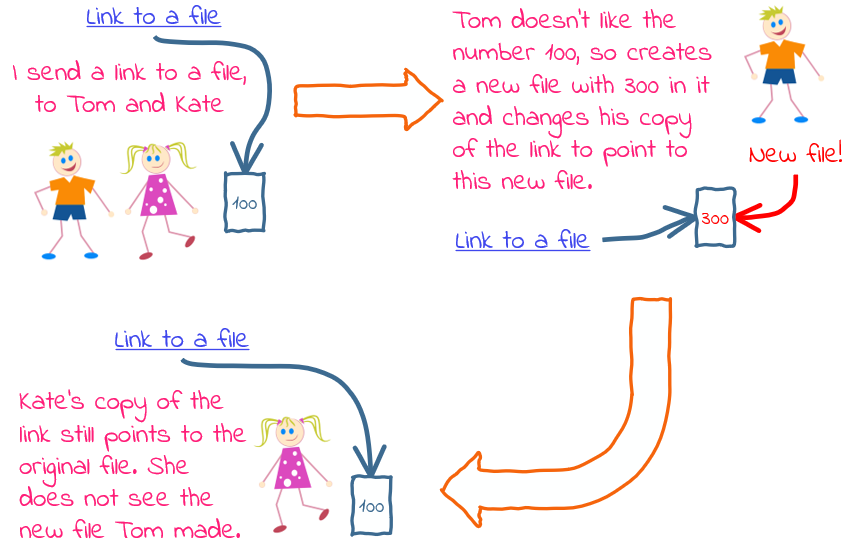 Tom has changed the copy of the link he has, which doesn’t affect Kate’s copy. So now their links point to different files.

Passing to a Method by Value

The default behaviour is passing by value without extra keywords looks like so:

You’re probably doing this 99% of the time without a thought.

Nothing new to learn, so need for any code samples. This will exhibit all the behaviour already covered above:

Passing to a Method by Reference

We have ref, out and with C# 7, in keywords for passing by reference.

Let’s just look at ref while we get our heads round what passing by reference means.

Note that the compiler will insist that the keyword appears in the call and the method, so our intention is clear both ends:

If you pass a value type by reference, there is no copying and the called method is able to make changes to the data, which will be visible to the caller.

I was cheeky in the warm-up test - I passed a reference type, by reference, which is not a common thing to do.

Back to the file link analogy to look at what happens when we pass a reference type by reference to a method: 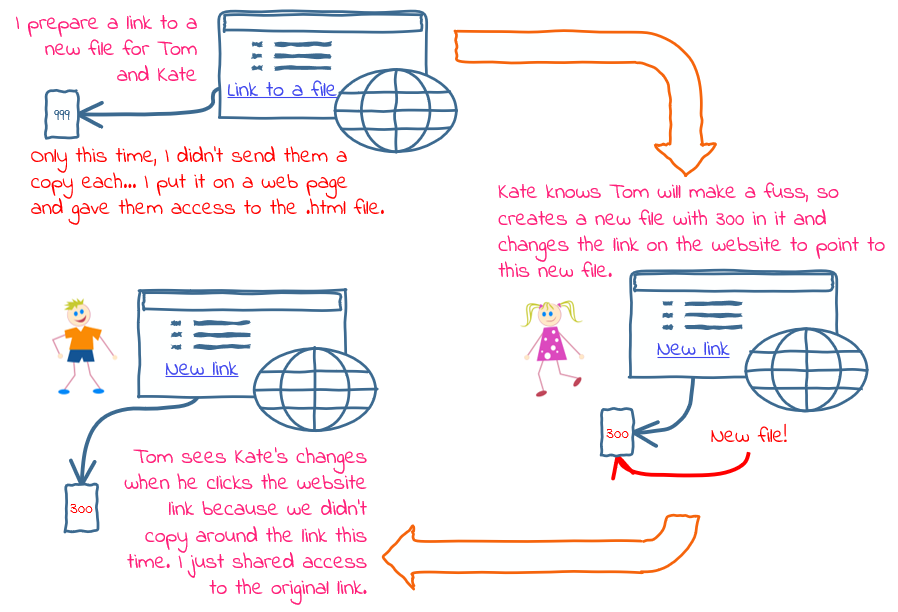 Instead of passing Tom and Kate copies of my link, I gave them access to the link itself. So as before, they both see changes to the file; but now also, if one of them changes the link to a new file, they both see that too.

So, using the ref keyword is kind of telling the compiler not to dereference / fetch the data from the memory location, but instead, pass the address itself, analogous to creating an alias.

We can see in the IL emitted for the code above, that the opcode stind is used to store the result back in the address of the int32 passed by address (note the &).

In C# 7 we got ref locals. They were introduced along side ref returns to support the push for more efficient, safe code.

I want to use them with reference types to give us a second chance to appreciate what happens when we pass a reference type around by reference.

Notice how the original is replaced by the copy now. In the IL we can see that ref locals utilise ldloca (for value and reference types) - we are copying the actual address where the value is (remember that the value in a reference type is a memory address were the object is).

By using ref, we are essentially making an alias to this value containing the address – any changes to either, including pointing the reference to a new object, will affect both.

Just imagine I have an array of large structs and not the int I have used below.

I can now return a reference directly to an element in an int  array without any copying.

The gotcha with return ref is scope. Glance ahead and you’ll see I briefly cover the stack and stack frames, if you struggle with this bit. Ultimately, when a method returns you’ll lose anything on the stack and lose references to anything on the heap (and GC will claim it). With this in mind you can only ref return something visible in the scope of the caller. You can see above I am returning a reference to an index in the array held at the call site.

The real value is to avoid copying around large value types – they complement the existing feature to pass by reference, adding the (missing) reference-like behaviour we already get with reference types.

We could start using ref  returns and ref  locals, but expect limited use cases if you work higher up the stack. Many libraries we use have already or will be utilising these and the new Span<T> work, so it is useful to understand how they play.

For reference types, as with passing to method by ref, you’re giving a caller access to the actual memory location and letting them change it. If anyone has come across some real-world scenarios please share so I can add it here.

Where do the Stack, Heap and Registers fit in all this?

Misconception: value types are always allocated on the stack. Wrong! If we’re going to get into discussions about where allocations occur, then it would be more correct to state that the intention is more like:

Mostly, we shouldn’t be concerning ourselves with how any particular JIT allocates and we should make sure we know the differences in how the two types are passed around. That said, the .NET roadmap has been focused on ‘inefficiencies … directly tied to your monthly billing’, and delivered Span<T>  and ref struct, which are stack-only.

For interest, here’s a few scenarios where we can expect a value type will to be heap allocated:

What does it even mean to allocate on the stack (or the heap)?

This stack thing, it is actually that same call stack, made up of frames, which is responsible for the execution of your code. I’m not going to teach you about what a stack data structure is now.

A stack frame represents a method call, which includes any local variables. Those variables store the values for value or reference types we have already thoroughly discussed above.

A frame only exists during the lifetime of a method; so any variables in the frame also only exist until the method returns. 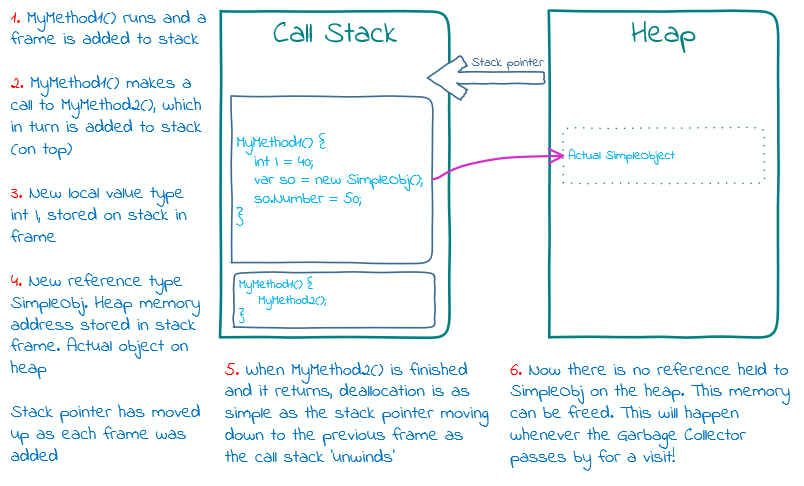 A big difference between stack and heap is that an object on the heap can live on after we exit the function, if there is a reference to it from elsewhere. So, given that passing references to objects around can potentially keep them alive forever, we can safely say that all reference types can be considered long-term and the objects/data will be allocated on the heap.

Misconception: The integers in an array of integers int[]  will be allocated to the stack. Wrong. Value types are embedded in their container so they would be stored with the array on the heap.

Out and ref produce almost identical IL with the only difference being, the compiler enforces correct code who is responsible for initialising the object being referred to:

Great for avoiding copying value types but how do prevent the method being called from making unwanted modifications? C# 7 introduced the in  modifier. It got the name by being the opposite of out (because it makes the reference (alias) read only; and the caller does have to initialise the value).

The equivalent for the other direction i.e. `return ref</span> , is the new modifier: ref readonly .

Here’s the immutable array example from the readonly ref proposal:

Now we can still get a reference to an array element without copying, but without the dangers of full access to the location:

You can convert from value to reference type and back again. It can be implicit or explicit and is commonly seen when passing a value type to a method that takes object types:

An interesting case of implicit boxing is when working with structs that implement interfaces. Remember, an interface is a reference type.

This will cause a boxing to occur.

When the C# compiler spots any implicit or explicit boxing it will emit specific IL:

When the JIT compiler sees this instruction, it will allocate heap storage and wrap the value type contents up in a ‘box’, which points to the object on the heap.

If you are careful, boxing is not going to hurt performance. Problems arise when they are occurring within iterations over large data sets. There is both additional CPU time for the boxing itself, followed by the additional pressure on the garbage collector.

Remember we rebuffed the misconception that ALL value types go on the stack. With that mind, it doesn’t mean int objects ending up on the heap are boxed. Take the code: 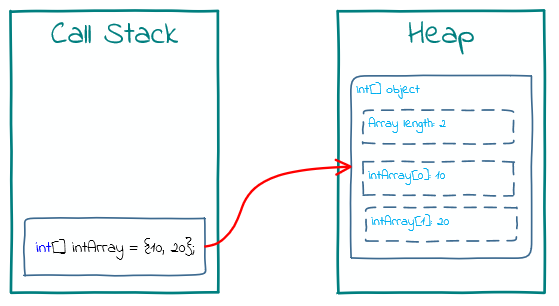 Some homework because I ran out of space

Who knows? I play with the internals a lot and read a great deal, so can’t be sure where it all comes from. It’s just in my head now. Probably:

An alternative using WSL 2, where Docker Desktop is not available to you in Windows

.NET 6 introduces new LINQ method to count the number of elements in a sequence more efficiently.

New to LINQ in .NET 6 - Easier to work with complex objects